The hit musical comedy is back on the road for a brand new tour.

Based on the iconic characters created by Charles Addams, The Addams Family musical has a book by Marshall Brickman and Rick Elice with music and lyrics by Andrew Lippa.

The new touring cast will be led by Joanne Clifton and Cameron Blakely who play the roles of Morticia and Gomez Addams respectively.

The tour started on 5 November in Nottingham before visiting Cardiff and Sheffield this year. The tour then continues in Milton Keynes in January before dates across the country into the summer.

Wednesday Addams, the ultimate princess of darkness, is all grown up and has a shocking secret that only Gomez knows. She’s fallen in love with a sweet young man from a respectable family. With his cherished Morticia in the dark will Gomez manage to keep his daughter’s secret until the two families meet for a fateful dinner with hilarious consequences?

Join them, plus Uncle Fester, Lurch, Pugsley and more for a heart-warming story of love, family and friendship… with a twist! 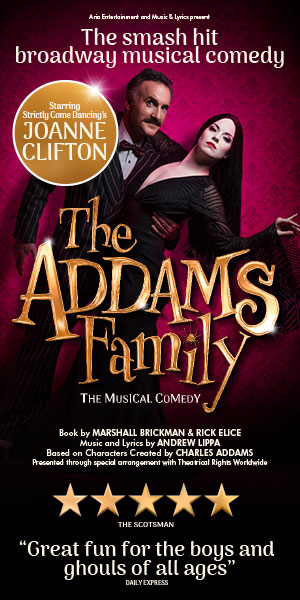