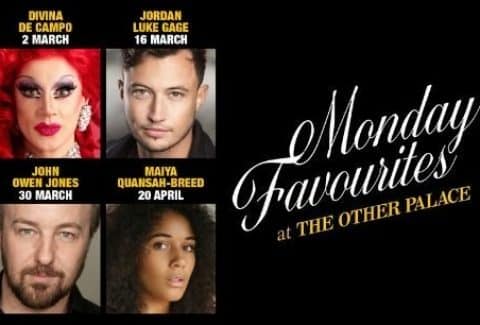 Jordan Luke Gage comes to Monday Favourites at The Other Palace
From £42.00
Book Tickets

Due to the phenomenal success of the first two seasons of Sunday Favourites at The Other Palace, Lambert Jackson are thrilled to present the star-filled line-up of their third season in the Favourites series. Like the first seasons, this series will be made up of intimate West End concerts that will take place on various Mondays of March and April 2020. Featuring Divina de Campo (Finalist on RuPaul’s Drag Race UK), Jordan Luke Gage (& Juliet, Bat Out of Hell), John Owen Jones (Les Miserables, Phantom of the Opera) and Maiya Quansah-Breed (Six).

This event is suitable for all ages.