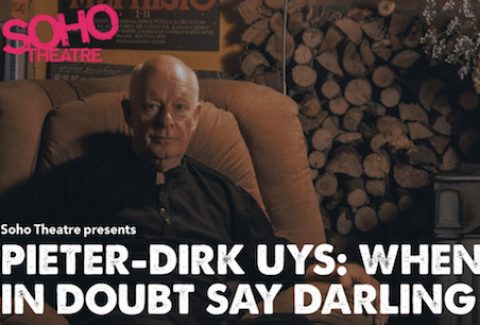 Pieter-Dirk Uys: When in Doubt Say Darling
From £22.00
Book Tickets

Legendary South African satirist Pieter-Dirk Uys returns to London to expose the ‘mock’ in democracy and highlight the 'con' in reconciliation.

In this era of #MeToo and political correctness, can calling someone ‘darling’ be seen as sexual harassment? Should an actor who is not black impersonate a character who is not white? Is a male performer allowed to dress up as a woman? Welcome to the minefield of hashtags and hate speech.

Having presented his acclaimed memoir The Echo of a Noise in 2018, the South African playwright, author, satirist, and impersonator of all genders returns with When in Doubt Say Darling. In these chaotic global political times and with a crucial South African general election looming, Uys’ hands are full. Coming back to the UK, he also asks: Is Brexit nothing more than a politically correct version of the separate developments of old apartheid?

Sometimes politics repeats itself, not only taking history and turning it into farce, but taking farce and turning into the fake news which is now called entertainment. When in Doubt Say Darling sorts out 40 years of distress, disguise and disgust: from apartheid to tripartite, from amandla to Nkandla – and happily back to amandla. At a time when a casual greeting or embrace can be seen as racist or harassment, Uys’ advice is simple: when in doubt, say darling. If you can’t remember their names, just say darling. If you get lost along the road to somewhere, simply ask for Darling. He did it, and now he also lives in Darling. Join him and many darlings on an exciting walk through this new minefield of hashtags and hate speech to the edge of the next cliff of crisis, when the end of the world seems nigh. It also used to be called a sunset, but here’s a secret: the sun will also rise tomorrow, darling.