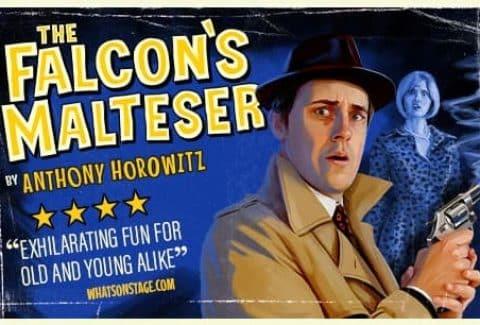 The Falcon's Malteser to take to stage at The Vaults this summer for a strictly limited season.
From £36.00
Book Tickets

Don’t miss this acclaimed stage version of Anthony Horowitz’s hilarious novel introducing the Diamond Brothers Detective Agency. Tim is the world’s worst private investigator, so can the help of his clever younger brother Nick be enough to crack their toughest case yet?

A solitary box of Maltesers is delivered by a miniature Mexican, but what’s so special about these chocolates that half of London's criminal underworld are willing to kill for them? New Old Friends’ acclaimed adaptation features four actors playing dozens of characters, comedy songs, and a fully realised car chase on stage!

Diamond ticket holders will be seated in the front rows of the theatre in reserved cabaret-style seating.Gold ticket holders will be seated in the general admission area of the theatre, and can select their own seats upon arrival.A limited number of Early Bird tickets are available at each performance and offer reduced price seating within the Gold areaLatecomers will not be admitted. Due to nature of the space it may not be possible to readmit patrons.