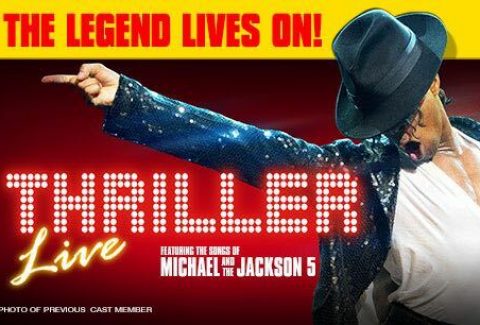 SAVE ON TOP PRICE TICKETS

Established in 2006, THRILLER LIVE moonwalked into the West End after three acclaimed UK tours and standing ovations across Europe. Currently playing at the Lyric Theatre, as well as simultaneously touring the world, award-winning director Gary Lloyd’s THRILLER LIVE brings to life the sensational dancing and distinctive sound of Michael and the Jackson 5.

In a career spanning 40 years, Michael Jackson sold an unparalleled 750 million records worldwide with the Thriller album still the world’s best-selling recording of all time. His music continues to sell in its millions, winning new fans young and old alike.

THRILLER LIVE includes over two-hours of non-stop hit songs in a show that pays homage to the world-class spectacle of Jackson’s legendary live performances.

Expect your favourite Jackson songs delivered by an exceptionally talented cast and live band, including the smash hits: I Want You Back, ABC, Can You Feel It, Off The Wall, The Way You Make Me Feel, Smooth Criminal, Beat It, Billie Jean, Dirty Diana, They Don’t care About Us and Thriller plus many more!

Children under 4 will not be admitted.

Peter Andre will not be performing on 14 December at 4pm or at any Sunday evening performances. Please note Wednesday 22 January at 7.30pm is a Singalong performance.