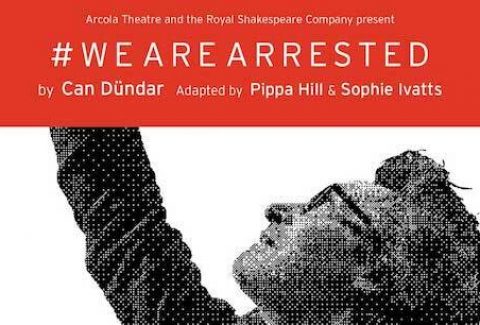 Arcola's first RSC co-production based on the book by Can Dündarook, #WeAreArrested
From £12.00
Book Tickets

by Can Dündar
Adapted by Pippa Hill and Sophie Ivatts

Arcola’s first co-production with the Royal Shakespeare Company is a vital story about the cost of reporting the truth in the age of fake news.

When a journalist is sent a flash-drive containing critical evidence of illegal government activity, he is duty-bound to publish the story. But with the nation destabilised and divided, a sinister power is eroding the rule of law. What price will he pay for speaking out?

#WeAreArrested is a gripping play about fighting for truth in a network of lies.

Adapted from the book by Can Dündar, who was arrested for publishing footage of Turkish State Intelligence sending weapons into Syria, this deeply personal and universal story finds urgent new life as authoritarian politics spread across the globe.

The editor of the country’s most esteemed national newspaper receives an astonishing piece of film footage one morning. It proves that the president is secretly smuggling weapons into a neighbouring country. The public and the parliament are unaware that they are being drawn into an international war. He decides to publish the pictures.

He is arrested by the government on charges of espionage and imprisoned indefinitely in solitary confinement. Leaving behind his wife and son, he relies on the power of his imagination to get him through his imprisonment. He finds ways to get around the prison’s ban on colour, to smuggle out articles for publication; he resists his captors with mischievous perseverance.

Finally, he is released but the government’s grip on the country’s media and its legal system makes his bid for a fair hearing more challenging still.

This play is adapted from Can Dündar’s beautiful book: We Are Arrested

The true story of a journalist’s commitment to expose the truth in the face of huge personal risks. This deeply moving play is a tribute to the bravery of journalists under threat around the globe.